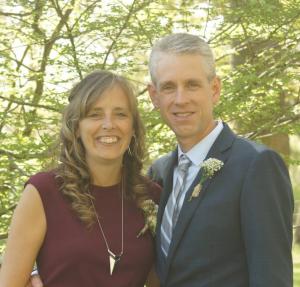 Pastor Mark Stewart originally hails from the great northern country known as Canada. He was raised in Toronto by faithful Christian parents. He felt the call to preach early simply by enjoying great Reformed, Christ-centered preaching. His home church also provided an opportunity to meet a girl whom he married in 1995. Mark and Christy have four daughters: Miriam, Megan, Rebekah and Emily.

Pastor Stewart studied economics in Toronto and eventually graduated from Mid-America Reformed Seminary in Indiana in 1999. He has previously served another URC church in Newton, New Jersey and has been in Burlington since 2010. Throughout the week you will probably find him somewhere in Skagit Valley at a Starbucks surrounded by a stack of books.

Mark loves playing games at home, camping, tennis and reading. On Monday nights you will find him and Christy playing volleyball together. Christy is a home educator and garage sale aficionado. They both enjoy serving the church of Christ and feel privileged to be in ministry together.